The interesting Yoruba movie 2018 speaks on the value we place on our children. The story is centred on the lives of a couple whose love for their career is higher than the welfare of their only kid.

While some argued and love the idea about the movie, other do not. In fact, a fan said:

“It’s pure foolishness for us to automatically assume that the woman will quit her job just because she is a woman.”

Another said, “It’s utter nonsense. They could come to a compromise and have 2 weeks off each.

And please why is it solely the woman’s job to take care of the child? Is your bleeding sperm not involved in that child?

Rubbish and nonsense of this our society.”

From the comments and story line, we can argue that the couple could have used common sense to solve the issue rather than blame the woman. Both party can work out time to spend with the child and why wouldn’t the mother to the wife offer to take good care of the child? Afterall it’s just for a month.

Also, they could have had simple conversation with their respective bosses and he/she would understand (unless of course they work for Lucifer, lolz).

The worst part is that they kept on stressing the fact that the woman’s primary responsibility is to take care of the child/children, really bruh? Reeeaaallly….?

The care of any child is in the hands of both parents. Although women are known to have a softer side for their kids, men too must be responsible at home and in the society. 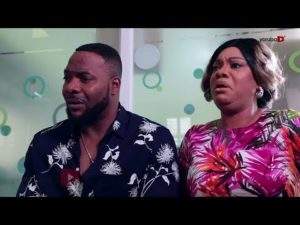 One theme I cannot forget in the movie is how it describe the modern 21st century Nigerian woman who is career driven. She became rude, proud and arrogant to her husband when she began to earn more.

Can you imagine? A man that paid her brideprice ooooo

Opeyemi Ayeola has spent more time than I know in English nations yet her movies don’t refelect this at all. Gabriel Afolayan directed this movie poorly too and there are lots of errors.

For example, how would a doctor tell the parents to leave their job? Wtf?

Once you download Mr Right Yoruba Movie 2018, you will also notice that they could have gotten a carer for 50k(a nurse or a relative) out of their combined income of 650k and agree to call their child every 4 hours. I will never advice any woman to leave their job or their husband. It does not take a full time carer parent to raise a sickle cell child. Now woman deserves to be forced to sit at home to take care of a child with a life long illness. This family will not survive on 100k income, the increment is not guaranteed. Let’s be rational