You are here: Home / Biography / Mercy Johnson Biography and Net Worth
ShareTweetGoogleWhatsappPinterestDiggLinkedinRedditStumbleuponTelegramFlipboard

Mercy Johnson a.k.a “Dumebi” is a renowned Nollywood actress known for her movies like “The Maid”. To learn more about her profile, bio, career, childhood and timeline read on the following Mercy Johnson biography.

Mercy Johnson was born as Mercy Johnson Okojie on 28 August 1984. She is a Nigerian actress and a motivational speaker.

She made her debut acting in the movie, “The   Maid” in which she played the role of a demon-possessed house help.

Her outstanding performance in the movie secured her the limelight and she has acted in other major movies ever since.

She is a native of Okene in Kogi State, Nigeria. 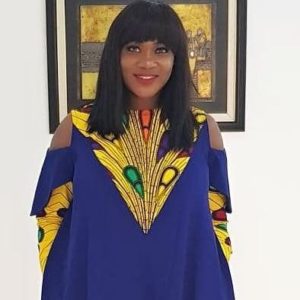 After which she gained a degree in computer science at then NVC Port-Harcourt. After a while, she got admission to study the English language at the Lagos State University but after her 2nd year, she deferred due to a financial constraint.

She was born Mercy Johnson Ozioma and comes from a family of 7. Large, isn’t it?

Her parents are Daniel Johnson, a military man, and Elizabeth Johnson. (Her mother died  in May 2018) Mercy is the middle child with 3 older sisters and 3 younger brothers.

Her older sisters taught her to be responsible and do house chores while her brothers made her a tomboy who enjoyed games and activities that are often designed for boys.

Her siblings are not public figures and certainly do not like being in the limelight. She does he best to respect their decision.

It was a grand occasion attended by many dignitaries including Nollywood stars and top government officials.

The lovely and beautiful actress celebrated her 35th birthday on 28 August 2019. She made sure she enjoyed every moment of it.

Okojie shared the most adorable video clip of she and her husband, Prince Odi, dancing romantically and looking like teenagers who just fell in love. It is amazing to see that after seven years of marriage, the two are still waxing strong.

A lot of celebrities and fans have dropped comments on the post, praising the couple for proving that love is amazing and worth waiting for. Even as it is a day for Mercy, the happy wife is celebrating her husband too, proving that she is a beautiful and selfless person.

Mercy doesn’t have any twin siblings. However, some time ago, Nigerian internet users were surprised to see news about a secret twin sister of Mercy Johnson that looked absolutely identical to the actress.

The woman in the pictures is only a look-alike of the beloved Nollywood star. It’s nothing more than a fun coincidence.

After her secondary school education, she adutioned for a role in The Maid and acted in a variety of movies like : Hustlers, Baby Oku in America, War in the Palace after that.

In 2009, she won an award for Best Supporting Actress at the 2009 African Movie Award ceremony, and Best Actress award at the 2013 Africa Magic Viewers Choice Awards for her role in the comedy movie Dumebi the Dirty Girl.

In December 2011, she was listed as Google’s most searched Nigerian celebrity, a position she also held in 2012. She is the senior special assistant(SSA) to the Kogi state governor on entertainment, arts, and culture. This post took effect from 1 April 2017.

Mercy Jonson Net worth is ₦850 million. She earned a spot in the top 10 spot list of the richest actresses in Nigeria.

Isn’t this Mercy Johnson Biography interesting? Support us by sharing this with family and friends.